As a web developer, your most common font problem is probably “Why doesn’t this character look like what I expect it to look like?”

Your problem is either

This character isn’t even legible

First I’m going to define some concepts with which we can troubleshoot most font problems. Then I’ll apply them to the three typical font problems I mentioned above.

Glyph: An image of a character. For example, these are all glyphs for the character a: 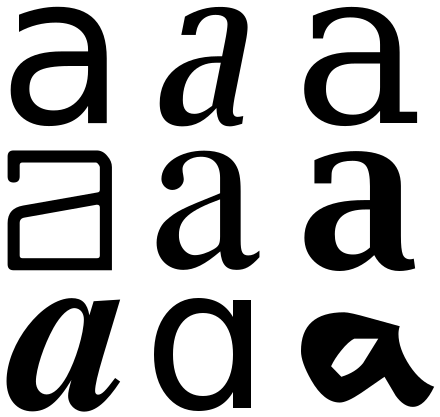 Font: A set of glyphs representing a range of characters. These are the glyphs that make up the font Comic Sans Regular. The characters supported by a font typically belong to a group, such as ASCII characters or math symbols.

Now that we have a lexicon with which to talk about these things1, we can make some headway with troubleshooting each of the three font issues I mentioned:

In later posts, we’ll walk through further debugging steps for each type of issue.

1 If you find my grossly simplified glossary unsatisfactory, here’s a more thorough and entertaining overview written by someone smarter than me.